The North Jersey District Water Supply Commission (NJDWSC) is the municipal water supplier for residential customers and private and public companies in 12 counties in northern New Jersey. The commission serves these customers by controlling the level and flow of water from the Wanaque River reservoir in upper Passaic County, a task that is made as secure, efficient and reliable as possible by a Planar Clarity™ Matrix LCD Video Wall System recently installed in NJDWSC’s administration and control center in Wanaque, New Jersey. 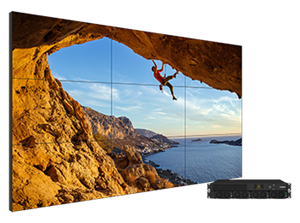 The North Jersey District Water Supply Commission (NJDWSC) is the municipal water supplier for residential customers and private and public companies in 12 counties in northern New Jersey. The commission serves these customers by controlling the level and flow of water from the Wanaque River reservoir in upper Passaic County, a task that is made as secure, efficient and reliable as possible by a Planar Clarity™ Matrix LCD Video Wall System recently installed in NJDWSC’s administration and control center in Wanaque, New Jersey.

“We are acknowledged as offering one of the highest quality water supplies in America and are one of the most efficient providers in New Jersey,” says Charles Billings, Director of Information Technology for NJDWSC. “This owes, in large part to the Planar video wall, which gives our operators a clear picture of our complete water delivery system. It also enables managers to see what’s happening in any part of the system at any time so we can do the best job of managing the network.”

Clarity Matrix meets needs of both operators and managers

Billings and his team were aware of Planar’s position in the control room environment – “we saw that their displays were widely used” – which led to the selection of Clarity Matrix for a three-wide-by-two-high (3x2) video wall of Clarity Matrix MX46HDS displays. Engineering, integration and installation were provided by TDK Systems Group of Columbus, New Jersey. The video wall replaced desktop monitors which control room operators used to visualize and control functions throughout the plant as well as to keep tabs on pipelines, pump stations and downstream dams.

“We knew that the video wall would enable an operator or manager to better understand the status of any part of the process,” says TDK’s Todd Dieterly Sr., Executive Vice President and Chief Operating Officer. “But we also knew it would facilitate teamwork, collaboration and problem solving by simply allowing more information to be captured and displayed on a large, bright digital platform.”

Dieterly, Paul DiPascale (Vice President of Marketing) and the other TDK Systems team members, working with Billings and his IT staff, agreed on the 3x2 Clarity Matrix configuration and determined it would support the display of the required operational information as well as inputs from plant computers, external surveillance cameras and feeds from cable television, such as from weather networks. “Clarity Matrix has a very small tiled bezel width (5.5 mm) so we could look at P&ID diagrams, flow meter data and real-time broadcasts of local weather, and everything would be readable and virtually free of panel-to-panel gap lines that could distort or distract,” Billings says. “Other video walls have much larger bezels than Clarity Matrix and that would have presented problems for us.”

Another key factor was the mounting system Planar designed for Clarity Matrix. This system, called the EasyAxis™ Mounting System, combines a sleek, multi-axis alignment mechanism with a simple cable routing design. It facilitated quick and very precise alignment of the six Clarity Matrix displays and capitalized on the ability to run every display on one power and one data cable, all of which could be routed to a remote rack where power supplies, controllers and other components could be housed as well.

“It all adds up to a video wall that is lightweight and easy to install, that doesn’t require the electrical infrastructure other video walls do, that runs cooler than other video walls, and that is much easier to troubleshoot and service,” TDK’s DiPascale says.

Further, Clarity Matrix provides the ease of use and flexibility that NJDWSC was looking for in a video wall. That is reflected in aspects such as display pre-sets, the freedom to place content wherever it best serves operators’ needs, high brightness, and the ability to easily add components and capabilities. Billings says these attributes are important enablers to more efficient and productive network management.

TDK’s Dieterly concludes with a nod to Planar’s high level commitment to customer satisfaction. “They went above and beyond in preparing us to install the video wall and bring it online in just the right manner. And then they showed their market distinction by delivering a solution that was expertly packaged, with every necessary component, and made their technical experts available to us whenever we had a question.” He says further that Planar is a great company to work with, its people are all like-minded in their dedication to excellence, and they work to a common goal, which is providing an optimal solution and unequaled after-sale support. “This is totally in keeping with TDK’s business philosophy and mirrors our approach to customer service.”

TDK Systems Group, Inc. is widely recognized for its expertise in security, access control and CCTV implementations. It also specializes in systems design, engineering and integration.