What MicroLED Means for Pixel Density

When we launched the Planar® DirectLight® Ultra™ Series video wall displays in 2021, it marked the introduction of several new and exciting technology advancements that are pushing the industry forward and separating Planar from the LED manufacturing pack. Chief among those advancements is the implementation of mass-produced MicroLED. MicroLED wasn’t really available previously, even though it had been demonstrated a handful of times and experts agree it is the future of the industry for a variety of reasons. But what makes MicroLED different and, frankly, better? Among other things, the simple fact that it’s smaller.

MicroLED, miniLED and Standard LED are defined by the size of the individual red, green, and blue diodes (die) that comprise the LED pixel. These can be very small; measured in micrometers or sometimes called microns. Definitions can vary, but most experts tend to agree that anything using die larger than 200 microns qualifies as Standard LED, anything 100 – 200 microns is miniLED and anything smaller than 100 microns is considered MicroLED. 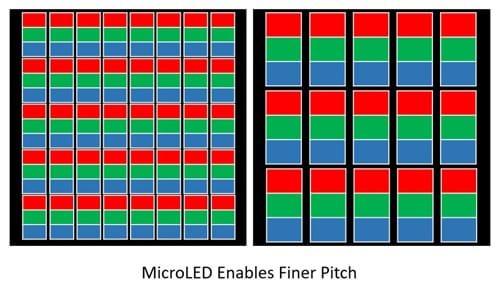 Just like marbles in a jar, the smaller the LED, the more one can fit in any given area. Using Standard LED, the highest pixel density typically available on an LED video wall is 0.9mm pixel pitch—the distance from the center of one LED pixel to the center of the adjacent pixel. It becomes difficult to get pixels closer together and displays looking good because of the physical die size. But, there always seems to be demand for higher pixel density— for more resolution in a given area, to clearly display more detailed or subtle visual information and to support up-close viewing distances. Regardless of the video wall size, more pixels mean greater potential for a better, more compelling viewing experience.

High Resolution ≠ High Pixel Density
Content ranging from command and control data to movies looks better with higher resolution. Getting more resolution comes one of two ways: by increasing the area of the video wall display or by increasing its pixel density with a smaller pixel pitch. The physically larger the video wall, the more resolution you get from the same pixel pitch. Unfortunately, the wider and/or taller the video wall with the same pixel pitch, the farther away the audience will need to be to view the content comfortably; and most conference rooms cannot fit a 300” display. More resolution also enables creation of wider video walls. Many rooms are limited in height but have additional width they could use for content. More pixel density opens the possibility to multiple content pieces presented on a display without scaling.

With MicroLED, like those we use in the Planar DirectLight Ultra Series and Planar® Luxe MicroLED, we can create video walls with even finer pixel pitches. The 0.6mm pixel pitch, the finest we currently manufacture, has 56% more pixels than our previous best at 2,560,000 LED pixels/m2. Because the pixels take up so little space and are so close together our 0.6mm models can pack 4K resolution into a 108” diagonal screen size and an eye-popping 8K at just 217”. These video wall sizes are much more conducive to up-close viewing and smaller spaces.

With the MicroLEDs taking up less real estate than ever before, there’s potential for even higher pixel density. We’ll see where that leads us.