Although there is no minimal computer power required to drive a Planar SD stereoscopic monitor, there may be limitations with graphics cards or special software. Use the specifications recommended by your software or graphics card provider. Of course, more memory and faster processing will provide better results. If you plan to use one or two side monitors in addition to the stereoscopic monitor, we would recommend a computer with two PCIe graphics card slots. We also recommend using a computer with a 5V PCI or PCIx slot that can accommodate the PCI mirror card.

Quad-buffered OpenGL stereoscopic applications such as those in the table in the next section will require a high-end graphics card such as the NVIDIA Quadro line or the AMD FirePro cards. Some of the ones that have been tested include:

If you use OpenGL software such as those listed in the table below, then please reference the instructions for the OpenGL stereoscopic configuration

Selecting a Side Monitor

If the side monitor matches the polarization of one of the displays used in the StereoMirror monitor, then you will only be able to see it with one eye when wearing the polarized glasses. A simple “workaround” is to select a monitor that has a different polarization. The table below shows Planar’s recommended desktop monitors to be used as side monitors with the given SD product.

Graphics Cards for the Side Monitor

If you plan to use an additional one or two monitors besides the Planar stereoscopic monitor as part of your workstation there are three options:

There are several laptops that use an NVIDIA Quadro FX mobile graphics card and support dual monitors. For example, both the Dell Precision M6400 Mobile Workstation and the HP EliteBook 8730w Mobile Workstation use the Quadro FX2700M and could drive two monitors. The analog VGA output would need to be connected to the lower monitor of the SD unit. The DisplayPort output should utilize the DP-to-DVI adapter and get connected to the DVI Inverter Box that will mirror the image sent to the upper monitor. The diagram below shows how the video cables connect to an older Dell M90 laptop which had a laptop docking station that could house the PCI mirror flip card. 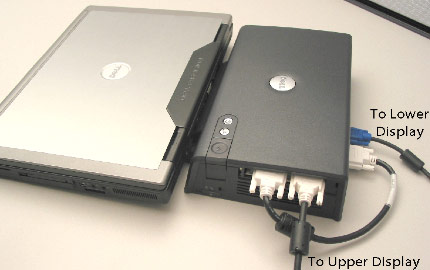 If an OpenGL stereoscopic application such as RemoteView or SocetSet is being used on the laptop, then the two SD displays should be put in Clone mode. Make sure that stereoscopic is enabled in the advanced global settings and that the stereoscopic viewing mode has nView Clone mode selected.

If stereoscopic pictures are to be shown, then the monitors can be put in dual monitor mode with the analog selected as the primary and the digital selected as the secondary.