Diana Thater is a featured artist presented by David Zwirner at The Armory Show 2013, opening today and continuing through Sunday, March 10th.  The artist’s solo presentation at the gallery’s booth #701 features of three new video walls made up of nine monitors each.  The eye-catching video walls consist of a 3x3 configuration of Clarity® Matrix™ tiled LCD video displays from Planar Systems integrated by Peter Andros and Video Visions. 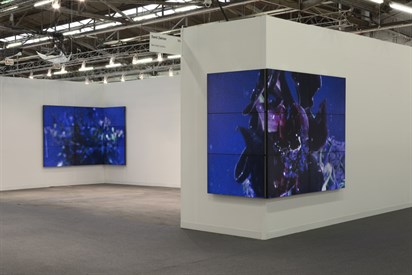 According to the gallery, the work is entitled Day for Night, and “each of the video walls presents footage of purple clematis flowers shot in 16mm film using several camera techniques, including in-camera double exposures and day-for-night filters.”  This approach gives the flowers an otherworldly effect with the rain, flowers, and background all on three separate layers. The artist is known for her meditative still lifes, supersaturated colors, and grainy filmic surfaces, and with this piece Thater proposes that flowers “live in motion and in time.”

“Video is a new material,” commented Jennifer Davis,VP of Marketing for Planar.  “Diana Thater’s innovative work not only fills the canvas of the video wall with incredible imagery and saturated hues, but by placing the displays in a wrapped configuration, she gives the work a sculptural element that plays off the architecture and draws the viewer into the installation.”

The Armory Show, a leading international contemporary and modern art fair, takes place every March on Piers 92 & 94 in central Manhattan. The Armory Show is devoted to showcasing the most important artworks of the 20th and 21st centuries. In its fifteen years, the fair has become an international institution, combining a selection of the world's leading galleries with an exceptional program of arts events and exhibitions throughout New York during the celebrated Armory Arts Week.  David Zwirner’s exhibit and the work of Diane Thater is located at booth 701.

Representing forty-two artists and estates for twenty years, David Zwirner is a contemporary art gallery active in both the primary and secondary markets with galleries on W 19th Street in New York’s Chelsea district and in Europe with the opening of a London gallery on 24 Grafton Street in the heart of the Mayfair district. In the primary sector, the gallery covers a broad spectrum of contemporary artistic practice, from seminal Minimalist works to large-scale installation and time-based performances and video work. In the secondary market, the gallery has become known for presenting historically-researched exhibitions and publications devoted to the work of modern and contemporary artists. Diana Thater has been with the gallery since its beginning with shows dating back to 1994.