A Display By Any Other Name

“A rose by any other name would smell as sweet”

Everyone in the display industry and in the larger A/V space has been tracking the growth of 4K or Ultra High Definition (UHD) resolution displays.  Our own award-winning Planar® UltraRes™ has entered strongly into the growing category and has won its own following with the professional features, and now the new iOS app.  And the 4K additions to the Planar® EP Series are gaining traction.

But the debate rages on what to call these displays.  Most of the screens in the market today in this class of display measure 3840 by 2160 pixels, making them 4 times the resolution of full HD.  Technically, the resolution is called Ultra High Definition (or Ultra HD or UHD).  4K is the technical term for a display that is twice as wide as a 2K display (a cinema standard that measures 2048 wide instead of the more standard 1920).  In other words, technically 4k would be 256 pixels wider than a UHD display.  Yet, the 4k monitor exists and they are used interchangeably in the market.  And to make matters more confusing, YouTube and the television industry has adopted Ultra HD as their 4K standard.

And the 4K label is likely to stick, at least for a while.  A recent search of trending internet search terms on Google revealed the following comparison. 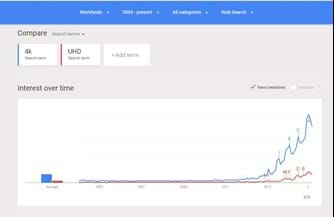 The term “4K” is searched with more frequency and has been on a higher trajectory of growth since first picking up speed in 2013 and it doesn’t show signs of stopping in its undulating trend line.