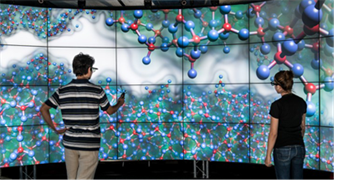 When UIC researchers couldn’t buy the 3D technology they needed, Planar Systems made it for them

The University of Illinois virtual reality environment, dubbed CAVE2, is approximately 24 feet in diameter and 8 feet tall, and consists of 72 near-seamless Clarity Matrix 3D LCD panels, a 36-node high-performance computer cluster, a 20-speaker surround audio system, a 10-camera optical tracking system and a 100-Gigabit/second connection to the outside world. CAVE2 provides users with a 320-degree panoramic environment for displaying information at 37 Megapixels in 3D or 74 Megapixels in 2D with a horizontal visual acuity of 20/20.

To build CAVE2, in 2010 EVL received funding from a U.S. National Science Foundation economic stimulus grant and immediately began working with Planar Systems. At the time, thin-bezel, flat-panel, passive-stereo displays were not commercially available, so EVL consulted Planar and Planar was able to design the Clarity® Matrix™ 3D LCD Video Wall, which launched in January 2012. These systems were fine for the middle rows of CAVE2, but to a person standing inside CAVE2, the information displayed along the top and bottom rows would appear ghosted.  With the Clarity Matrix 3D LCD Video Wall, the team was able to accommodate the off-axis vertical viewing angles.