Earlier this summer Pratt Institute hosted the Form and Technology workshop under leadership of Scott VanderVoort. The goal of this workshop was to intersect the latest Planar products with the fresh creativity of Pratt’s design students and thought leaders.

The students spent a lot of time working with a sample of the 32” Planar® LookThru™ transparent display.

During this workshop the students at Pratt Institute generated ideas of how Planar’s pioneering transparent technology could be incorporated into different industry settings. Here are two inspiring creations the Pratt team envisioned using the transparent LCD surface glass.

1)Jacob Turetsky suggested the use of the Planar LookThru in a medical laboratory environment. Allowing researchers the ability to have everything they need, from charts, graphs or other information, accessible right on the screen in front of them as they worked in a sterile environment. 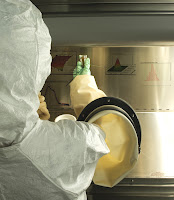 2)Louis Chang took a different approach combining the ubiquitous household microwave with the Planar LookThru. This concept allows all of the information to be digitally displayed on the door, then disappearing to be able to view the contents inside.

These are perfect examples of how Planar LookThru can be used and adapted into different industry environments. From a scientist trying to uncover medical mysteries to a mother preparing family dinner, Planar LookThru ignites the next decade of transparent display innovation.