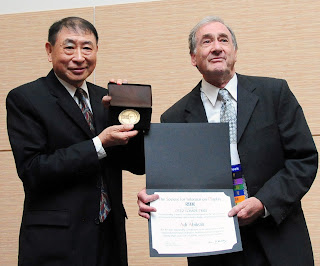 Adi Abileah, Planar's Chief Scientist in the Technology Group, was recognized in early June by The Society for Information Display (SID), with the Otto Schade Prize. The prize is awarded for an outstanding scientific or technical achievement in, or in contribution to, the advancement of functional performance and / or image quality of information displays.

Adi was specifically recognized by SID “for his many outstanding contributions to the enhancement of the functional performance of displays, including contrast, brightness, viewing angle, gray-scale resolution, and stereoscopic imagining.”

In addition to his 34 U.S. patents, mostly related to displays and backlights, Adi is the director of the Pacific Northwest SID chapter, has presented many technical papers and seminars at SID, SPIE, and OSA conferences, and has made significant contributions to the development of Planar’s displays, backlights and enhancement techniques since joining the company in 1998.

"Having the caliber of display prowess Adi brings to Planar is a great asset, and this recognition from SID in the Otto Schade Award is well deserved," says Ben Clifton, VP of Technology at Planar. "Adi is not only a great scientist, but also a warm, humble, and gracious human being. It is a real privilege to work with Adi--all of us congratulate him in this honor."