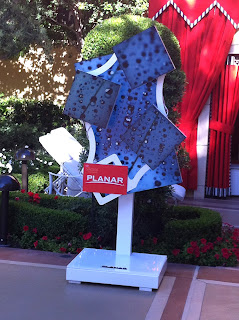 On Tuesday night, we enjoyed an evening of cocktails and conversations in the sunshine at the terrace pool at the Wynn Hotel in Las Vegas. Our co-hosts were none other than Cindy Allen, editor of chief of Interior Design magazine and Roger Thomas, the iconic designer from Wynn Design and Development who is largely credited for making Vegas into the visual spectacle of architecture and design that we enjoy today. Cindy welcomed the crowd to “Roger’s house” as we enjoyed drinks on the patio. It was a wonderful opportunity to connect with the design community assembled in Las Vegas for the Hospitality Design Expo and to honor contributions made by the Giants of Hospitality Design, as the event name alluded.

Planar showed a demonstration of the Planar Mosaic, highlighting the use of a mix of tiles, positioned overlapped at angles, running a single slide show. It was an attention grabber that started a lot of conversations. Designers were rattling off ideas for using it behind hotel reception desks, in corporate lobbies, in bars and restaurants, and in projects in healthcare. We also had a chance to play with the new Planar Mosaic Project Designer Online where walls can be designed, saved, and shared. It is a playground for creativity and it’s free.

Planar wants to congratulate Cindy Allen, who this week was honored with a honorary doctorate by the Academy of Art University (AAU) in San Francisco. Cindy continues to show her leadership in the design and non-profit community as a co-chair of DIFFA (with David Rockwell from the Rockwell Group whose work in hospitality circles is legendary).