Water ingress testing on your rugged display can be performed in several ways. In this image, you see a Planar LA1750RTZ prototype undergoing a water ingress test with 65 gallons of water a minute, 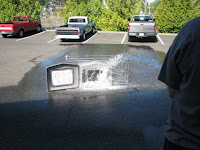 from a 1" diameter fire hose, for almost 5 minutes. Imagine the pressure on the display panel and enclosure from this amount of water over the 5 minute duration! This is one surefire way to test any water seepage into your display and provides valuable test information to prevent the occurrence.

Displays are used in all sort of outdoor, rugged environments where they are subjected to liquid elements. From marine to emergency and heavy equipment applications, displays used in these functions are often submitted to considerable amounts of water and other liquids. And, the last thing you want to have happen is a display malfunction due to an ingress.

How would you like to see other tests conducted on displays for your rugged applications?